Kilis is next to Gaziantep. One of the vibrant regions for food in Turkey in the Southeast next to the Syrian border. Unfortunately there has been grave political unrest in the city recently. This is my tribute to the area from distance.

I was originally going to make homemade adana kebabs – however, the true adana kebabs require tail fat (kuyruk yagi) which is illegal to buy here. Also, another problem stems from the structure of American (or Kiwi) lambs who have less fat in there bottoms. So I moved onto other plans.

What is attractive about Kilis tava is it is made on one pan (so easier) and the presentation of the dish is stunning.It is very tasty. You can experiment with the type of vegetables you decorate it with. Our family friend for instance, who is from Kilis, told us that the original has only tomato and pepper as decoration and some also garnish it with fried eggplants. I just love starch so I went with the less conventional topping potato.

1 teaspoon Kilis pepper (you can add more and you can also use other kinds of redpper , Urfa – Isot – Aleppo)

A pinch of cumin

Olive oil ( a drizzle on top)

2 peppers (pablano, italian or any other mild large green pepper)

I was lazy and used a food processor. I processed the bell pepper, onion garlic together until it almost turned into liquid. I mixed that mixture with the meat making sure that the meat absorbed all the liquid. I added the pepper paste and kept mixing the meat. I added the seasoning in and continued to fix for another minute or two until all seasonings were equally distributed in the meat: Kilis pepper, cumin and salt  pepper and the very finely chopped parsley.

I have a fantastic pan for this – any large round pan will do (and does not have to be round either). I pressed the meat so that it is on the surface of the pan evenly on the surface (it will be about  half an inch). I sprinkled on top with a bit more kilis pepper. I decorated the top with the vegetables just like you would a cake. Drizzle the top with olive oil

If you want to decorate with a potato: pre-boil it. I cut it up the way I wanted and boiled for about 10-15 minutes – it was still not fully cooked but that way you ensure that your potatoes are done all the way.

Also 35 minutes in check on your kebab it may have released a lot of juice. I drained most of it. It gives crispier texture to the meat.

The last 3 minutes I broiled the top! 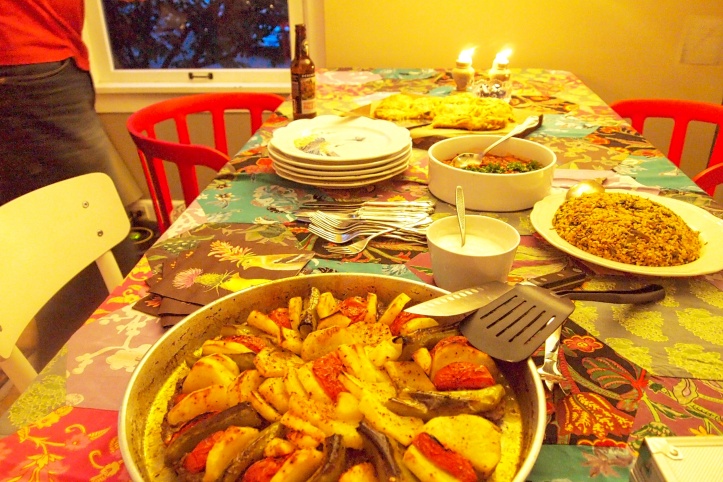 I AM TAKING PHOTOS